Anong and I met up with Lee and spent most of the day climbing at Railay.  We’ve been trying to meet up the past few days but it’s been raining a lot so we kept putting it off.  Finally today I woke up and it wasn’t raining.  So we got our stuff together and headed out.  We planned to meet at the boat ticket office in Ao Nang but there were no boats today from Ao Nang due to high waves and wind but we figured out we could get a boat at the Ao Nam Mao pier which is only a 10 minute ride away so we headed over there.  Once in Railay it started raining! 😦 I hoped it would stop soon and we headed over to the Muay Thai wall and climbed the following:

This area is sheltered a little bit.  It was raining off and on but not too hard so the rock was a little damp but not too bad.  Some patches of rock were very wet though from seepage of past rains through the rock but most was ok.  I led Hello Christine 6a then because I was feeling lazy and not stoked for the damp rock I just moved the rope over to the anchor for Valentine 6a+ and then Alone 6b because all three anchors are in close proximity to each other.

We ate lunch at a resort.  The food was ok.  I ate a hamburger and had french fries.  As much as I love Thai food, I do get a craving for Western food from time to time.

After lunch we headed back to Muay Thai wall did one more climb.  Nuat Hinn (Massage the Rock) 6a+

From the ground this route looked pretty dry.  But there were a few times I reached up for a hold and it felt like I was putting my hand in a bucket of water.  The top of the climb was quite wet and not much fun to lead.  This is a fairly popular route which means there a lot of chalk on the rock.  All this chalk turns to slime when it gets wet so some parts of the climb were very slippery.  But I got to the anchor ok.  We each climbed this one twice then caught a boat back to Ao Nam Mao.

Hello Christine 6a.  I need to bike more.  I have “love handles” spilling over my harness from eating too much durian. 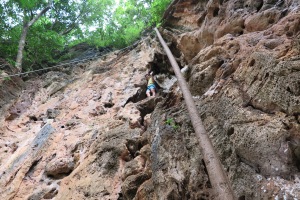 Lee found a good rest spot on Alone 6b 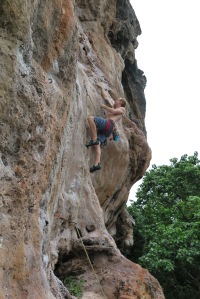