The vegetarian festival in Thailand is called “Tet-sa-gan Gin Je” (Thai: เทศกาลกินเจ).  It is the celebration of the Nine Emperor Gods Festival.  Je (Thai: เจ) is the word for vegetarian.  But it really means vegan with additional restrictions.  Like vegans, dairy is not allowed.  Also not allowed are garlic, onions, alcohol, and sex.  A few days ago there was a parade in Krabi Town.  Parades in Thailand are pretty much like parades in America.

There are spectators anxiously awaiting the start of the parade.

There are participants marching down the parade route carrying banners for the organization they represent. In this case, one of the 80+ Chinese temples in Krabi.

There are people taking pictures.

There are floats. Though they are not as elaborate as in America. These are just some small statues on top of the cab of a pickup truck.

There are elaborate costumes.

There are cute kids having a fun time. 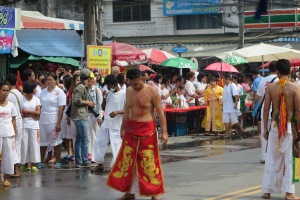 There is the blood…

And the tongue slashing.

Wait.  What!?  I’m pretty sure we don’t have this in America.  Now that I think of it, parades in Thailand are nothing at all like parades in America.

It was very crowded. Difficult to tell participants from spectators. Spectators would creep in closer and closer. Many people walking through the parade. Then everyone would get pushed back when a float / pickup truck needed to go by, only to creep back in a moment later. 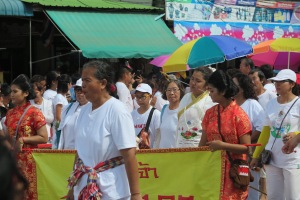 Then there are the piercings. Some are very gruesome as you will see later.

It’s not just the women that pierce their cheeks. 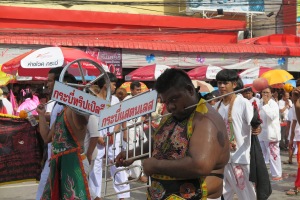 All sorts of objects are used for piercing.

Unfortunately I didn’t get a very good picture but look closely. This guy has two weed wackers! One in each cheek.

Every now and then the parade would stop and the tongue slashers would put on a little show. 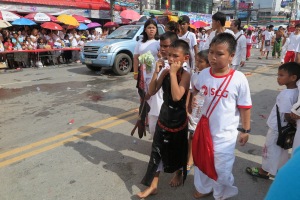 Even the little kids get in on the piercing action. 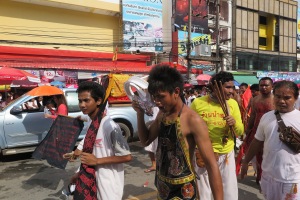 This guy appears to have pierced his cheek with a broken wheel from a motorbike. 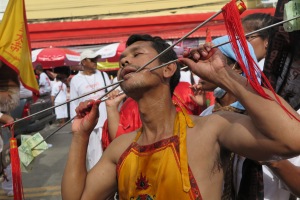 Most of the people appeared to be in some kind of a trance-like state.

A little hard to see but they guy squatting down is dancing directly over firecrackers. 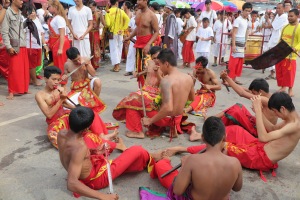 Show from another group of tongue slashers. 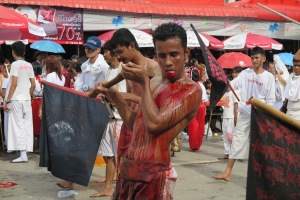 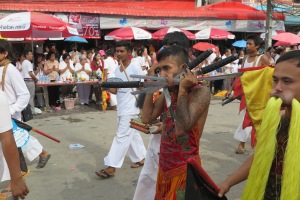 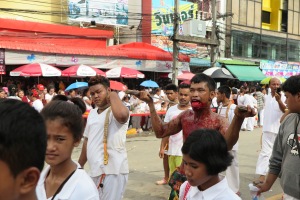 He was flinging blood everywhere.

Saw guy again. Really getting into it. 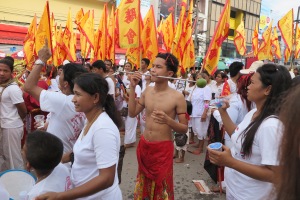 And an ambulance in case anyone gets hurt.

Well, it was interesting.  I’ve been observing the festival with my girlfriend for 8 days now.  It started on the 12th and goes to the 21st.  Two more days and I can eat a hamburger and drink some beer.