On the 11th Anong and I travelled to Koh Phi Phi to visit a friend of mine and her husband who were visiting from America.  We woke up early and by 12:00 we were on the island checking into our hotel.

Koh Phi Phi is very beautiful.  It has recovered from the 2004 tsunami and is back bigger and “better” than before.  I say “better” because Phi Phi now suffers from mass tourism.  I didn’t really see any Thai culture here.  Just lots of tourists.  It could have been a tropical island anywhere.  If one wants to relax on the beach and party at night, Phi Phi would be a good place to go.  Phi Phi is also the most expensive place I’ve stayed at and I didn’t think it offered good value for money.  Even though this is kind of critical of Koh Phi Phi I did enjoy my time there because I got to see some friends and the climbing is also good.  Oh, one good thing about Koh Phi Phi.  There are no cars on the island!  So at least I didn’t have to worry about getting hit by a car like I constantly do in Krabi / Ao Nang.

So back to the first day.  Anong and I met my friends for lunch then we headed off to Tonsai Tower for some climbing.  I had heard the grades here were soft so I was curious to see what the style of climbing was like and what I could do.

So, yeah.  The grades seem soft.  Or maybe I’m that good?  No, they’re soft.  But it feels good to lead 6b+ without too much trouble and even onsight a 6c for the first time!

Warm up on Scenic Bulimic 6a again.  Still feels pumpy.  Then we get started on today’s objective.  Going Dutch 6c+, a 4 pitch climb.  The first pitch was great.  More steep climbing with lots of jugs and pockets.  I was following but climbed it clean.  The next two pitches had some awkward sections on them.  Beta was difficult to figure out though graded easier than the first pitch I thought they were actually harder.  The final pitch was easier but the rock quality not as nice.  But overall it was a really good climb.  I was an idiot and dropped my ATC from the top of the third pitch which meant some time wasted on the rappel.  Amazingly enough I was able to find it in some bushes when we got down.  The sun was going down by the time we made it back to the ground and beers on the beach after tasted really good.

The climbing in Koh Phi Phi is pretty good, even with the aggressive monkeys.  I’ll post some pictures later.  The grades on a lot of the climbs are on the soft side. Onsighting two 6c’s as well as a 6b and top roping 6c+ cleanly has me feeling good about myself.  But some of the climbs are very weird and maybe it’s just figuring out the beta but I thought were full value.  I’m thinking of the 6b+ pitches of “Going Dutch” and the 6b+ Sol Y Sombra.  Overall a good trip that was lots of fun.

One night we decided to have a traditional northern cuisine dinner along with a show of traditional Thai dances. 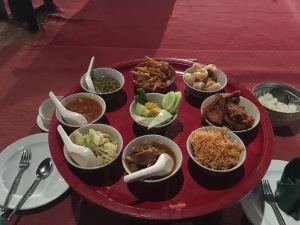 There were many different dances and lots of good costumes.

The next day was Loy Krathong.  We visited a few more temples.  I’ll spare the pictures since they start to look all the same.  In the evening we walked around the city and participated in the festivities.

A couple weeks ago we met Christine when climbing at Tonsai.  Turns out she was going to be in Chiang Mai around the same time as us.  She was with a bunch of other friends and invited us to Thanksgiving dinner.  There was no turkey (we had some chicken) but we got to have some other traditional thanksgiving dishes.  We also made plans to go climbing a day or two later.

Anong wasn’t feeling too well so she stayed in the city but I met Christine and Kat at CMRCA in the morning for a day of climbing.  We decided to climb at Reunion Buttress.  It has a few fun moderate climbs and a really good three pitch climb that we were able to do as 2 pitches thanks to my 70m rope.  First we warmed up on Teamwork 5c which was relatively straightforward.  Then we climbed Smells Like Team Spirit 6a which had a cruxy middle section and a really good finish.  Then we did did the Reunion 6a, 5a, 6a+ which was fun, a little scary on the last pitch, and had some really good views.  By this time, Kat had to catch her ride back to town but Christine was riding with me so we had time for one more.  We finished up with Reminisce 6a.  By now it was starting to get dark  so it was time to head back.  Pro tip, best to leave the crag around 4:30 or 5:00 even though it stays light till 6:00 or 6:30.  Once the sun starts to go down all the bugs come out.  My helmet didn’t have a face shield so dealing with all the bugs was annoying.  Other than that, it was a great day climbing! 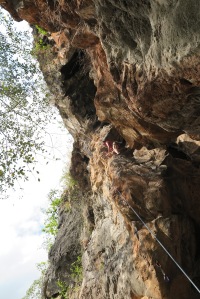 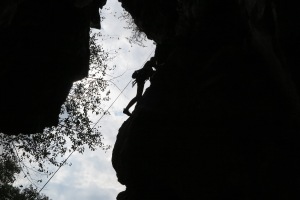 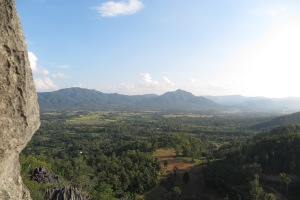 View from the top of Reunion.

The next day we went back with plans to meet some friends of a friend who were also in Chiang Mai the same time as Anong and I.  We climbed at The Rooftop which doesn’t actually have any roofs but gets up up really high at Crazy Horse and the views are really good.  Warmed up on A Route With a View 5c+, then did Heun Fah 5b, and finally the best route at the crag, Skyscraper 6a.  It’s a rather long route at 29 meters with lots of fun moves.  We ate lunch then headed over to Tamarind Village and climbed The Chimney Sweep 6a which took me a couple of tries to get.  I guess I need to work on my chimney climbing technique.  Then The Queen Bee 5c, 4500 5a, and finally finished up the day on Happy Birthday 6b which I climbed clean first go but on top rope and was a good finish to the day / climbing at Crazy Horse.

Anong belaying me as I head up Skyscraper.

Back in the city we had Khao Ka Moo from the cowboy hat lady.  It was really good.